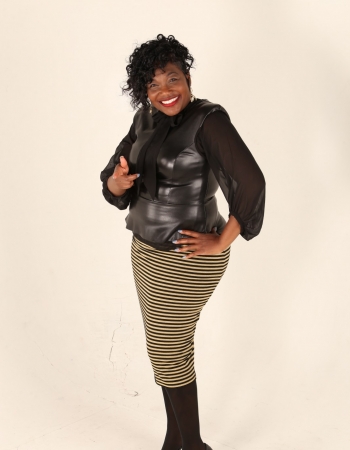 Our illustrious First Lady is a native New Yorker who accepted the Lord at the age of 18.  It was apparent at that time she possessed an anointing to pray.  Known for her passion for praying and experiencing manifested results, she was recognized as a prayer warrior and served diligently in ministry.  Pastor Meyers is also a worshipper at heart and was one of the original members of Professor James Hall and Worship N’ Praise.  She has traveled extensively with the choir and played an active role as Secretary and Board Member.

She gave her life to the Lord and attended Institutional Church of God in Christ, where she learned to pray and seek the face of the Lord.  She later attended Brooklyn Tabernacle Deliverance Center under the Pastorate of the late Bishop James F. Copeland.  During this time, she attended the Community Bible Institute and served on the evangelistic/outreach ministry.  After marrying her husband, Dwayne Meyers, she joined Victory Temple F.B.H. Ministries,  Brooklyn, NY and served in various capacities.  It was at Victory Temple where her leadership skills and gift of administration were further developed.

Lady Meyers, as she is affectionately known, can be found faithfully interceding each Saturday morning in 8:00 AM prayer at her church and is often called upon to intercede for marriages and families.  She has a gift to teach the word of God and her straightforwardness and practical teaching has blessed those she has come in contact with.  She is a dynamic teacher who possesses the ability to skillfully make plain the word of God to all who listen with an ability to teach to any age.  She also oversees the Beauty for Ashes women’s ministry and is a strong example of a virtuous woman with the power to provoke and inspire change she is often called upon by women for wisdom.

After many years of service and ministry, Lady Meyers was licensed as a Minister and shortly thereafter elevated to the office of Sr. Executive Pastor of Life Changers Family Worship Christian Center by Arch Bishop Robert Joel Rochford, of Dunamis Covenant Connection Fellowship headquartered in Brooklyn, New York.

Pastor Meyers serves tirelessly alongside her husband and resides in Duluth, Georgia with her husband, Overseer Dwayne Meyers, and their four children: Danaye, Dwayne Jr., Dohnte and Drew.